Matt Cooper has become a Patron of the Saoirse Foundation

Matt Cooper has become a Patron of the Saoirse Foundation

We are delighted to announce that journalist, author, television presenter and radio presenter of The Last Word on Today FM, Matt Cooper has become a Patron of the Saoirse Foundation, the charity set up by fellow Corkman Tony Heffernan in 2010, named after his late daughter Saoirse.
The not for profit charity operates a couple of innovative projects, including the world’s first interactive children’s ambulance service, the BUMBLEance, and Liams Lodge, a dedicated national children’s respite centre & hospice .
Matt Cooper stated: “I’m deeply honoured that Tony has asked me to assist in his incredible efforts to make life better for sick Irish children…and indeed for their parents. Anyone who has met Tony will have been more than impressed by both his compassion and his passion. He has been selfless in his work and anything that I can do to help him is a privilege. But far more important is what he is achieving, both in his plans for Liam’s Lodge, the respite centre and hospice, and the BUMBLEance, the wonderful custom built ambulance that offers some much needed comfort to very sick children. Whatever we can do, we should.”
Matt is literally putting his shoulder to the wheel with the charity and this September see’s the formal start of the BUMBLEance MEGA-Push in a bid to raise over €250,000 to fund and operate a 2nd new BUMBLEance.
Speaking on the announcement, Tony Heffernan founder of the charity said, “I am thrilled that Matt has got involved with us in such a positive way, Matt, a father of 5 himself, has been a keen supporter of the charity over the past few years and that he is now getting actively getting involved will allow us to help even more children here in Ireland”.
The MEGA-Push starts in Dingle town on Sept 10th, where Ice Explorer & Adventurer Mike O’Shea, Tony Heffernan & co will push & pull a vehicle over the notorious Conor Pass, a treacherous and windy mountain road before heading East towards Dublin, a journey that will take 10 days to complete. The team will arrive in St Stephen’s Green in the Capital on September 20th, where to finish off, the team will push the vehicle around a Half Marathon Course in Dublin City Centre. Volunteers and fundraisers are welcome to join the team along the route. More info on Facebook/ Twitter or online at www.BUMBLEance.com
‘Liam’s Lodge’ is named after Liam Heffernan (5), son of Tony and Mary Heffernan who are building a national respite centre and hospice for children on a 10 acre greenfield site in Blennerville, just outside Tralee town and near Kerry General Hospital. Liam Heffernan, sadly passed away in May of this year (2014) had the rare and fatal Batten Disease from which his sister, Saoirse (5), passed away from in 2011.
Planning permission for the centre is currently with Kerry County Council, Liam’s Lodge is a very welcome addition to Ireland’s health infrastructure, providing full respite & hospice care for children with critical life limiting & rare and genetic disorders with the care they need, while the child’s parents and siblings are given the chance to get some much needed rest and family time. With 29 family units or ‘homes away from homes’ to be built is this purpose designed building, allowing Liam’s Lodge cater for over 1,500 families a year.
If you would like to get involved in this great fundraising event by volunteering your time on the road to push, shake buckets or sponsor items contact us today on 083-0044444 or send us an email at infosaoirsefoundation.com to donate please text Buzz to 50300 €4 Donation 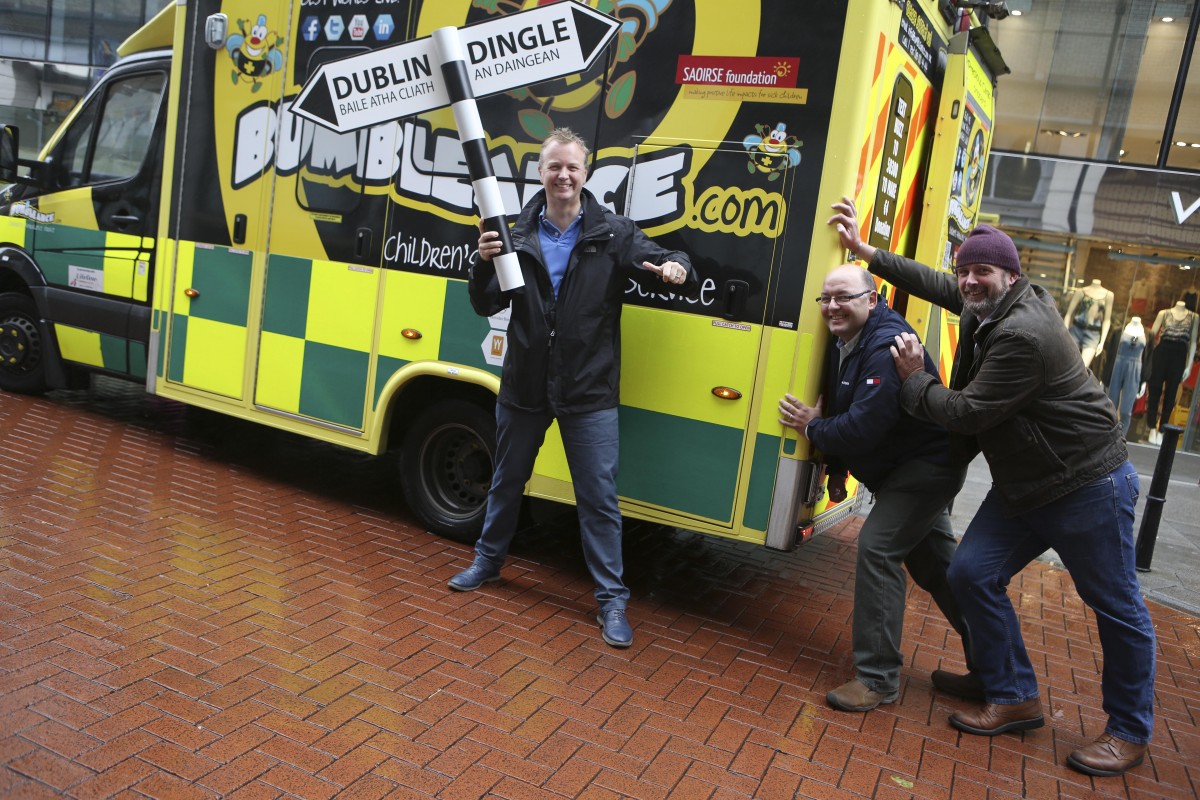