BUMBLEance was launched in 2013 and has become Ireland’s National and the World’s first interactive ambulance service designed specifically for children.
We spoke to founder Tony Heffernan to find out more about this amazing service and the charity’s first BUMBLEair flight this weekend for 12-year-old cancer patient Keith Gallagher.

Tony – for those who don’t know, what is Bumbleance and how did it come about?

BUMBLEance is part of the Saoirse Foundation, a not for profit charity founded by Tony and Mary Heffernan, proud parents of two special children, Saoirse and Liam.

With two critically ill children, we spent a lot of time on the road going to and from hospital appointments and surgeries. We know first-hand the stress and the challenges that parents face when moving seriously ill children.
The loss of dignity when attending to your kids at the side of the road, often very dangerous locations due to limited or no hard shoulder, Mary or I as driver, looking in the rear view mirror to see what was happening in the back, for example, Saoirse having multiple seizures a day, sometimes more than 200-300 times a day.

Following Saoirse’s death in January 2011 aged just 5, we knew it was time for a bright, happy and cheerful but specialised child focused ambulance service dedicated to transporting critically ill and seriously injured children.
BUMBLEance was launched in 2013 and has become the Children’s National Ambulance Service for the entire Island of Ireland. Our first vehicle, BUMBLEance 1, completed approximately 200,000 km in just 2 years, delivering smiles across the entire nation for hundreds of children from every county in Ireland.

In 2014, the Heffernan’s personally experienced the power of BUMBLEance themselves, when it undertook its most heart-breaking service, the end of life ‘Angel Trip”, This most special service allowed Liam to be taken home on his final journey on earth Like Saoirse, Liam grew his Angel Wings in our arms on our 13th wedding anniversary, at the age of 5 years.

Comparing Liam’s final trip to having Mary drive Saoirse home back in 2011 with me in the back, giving her oxygen, suctioning, attending to seizures etc….there is no comparison, I could line up 100 sets of parents whose children have died, I could almost guarantee that I could pick out those who were supported all the way to the grave by BUMBLEance, mentally and physically they all appear stronger.

Despite you and your wife being through so much hardship, you were determined to help other children and have said a lovely thing – that you now have a family of about 1,000 children?

Yes, and why not? Our only focus as a couple who have no further children themselves feel the need to help so many who are just so wrapped up in dealing with day to day challenges, many of which we can help with, so let’s get them from A to B to C etc.. so they have less to worry about. Let them be parents and given that many of our King and Queen bees will die prematurely, let’s make every journey as fun as possible.
And if it’s a final journey, then we can do the compassion, the dignity and give families the chance for their little one to pass away in the comfort of their home and not in a hospital.

What have been the highlights to date?

Highlights to date, getting to help so many sick children and actually delivering on our core vision – making positive life impacts for sick children, (and their families) plus irrespective as to when and where a child travels on BUMBLEance, or if a child grows their Angel wings, we never forget, it’s just a big BUMBLEance after all!
Every time I see a BUMBLEance on the Road, it makes me smile, knowing that our children continue to make the world a better place, even though they are no longer here with Mary and myself.

What have been the biggest challenges for the charity to date?

The biggest challenges are keeping the wheels of the charity rolling, we have to fundraise every single cent to buy the BUMBLEances and equip them as necessary and we rely on the generosity of the public to keep this vital service going!, Families rely on us at their most vulnerable period in their lives, we have to bee there for them!

Many charities have faced tough times over financial elements of the company, including BUMBLEance – how did you tackle this and come out on top?

We are very happy about the where the charity is and where it’s going, our board are very engaged, informed and optimistic for the future of the charity, with support like that we can hopefully only succeed in helping even more sick children.

Onwards and upwards, a very exciting event is happening for BUMBLEance this weekend – a possible new venture, BumbleAir?

Upwards is right! A number of years ago, I predicted that by 2017 we would have hopefully 5 vehicles on the road, and earlier this year our fifth and newest vehicle joined the fleet, (171) I also suggested back in 2013/14 that someday that our support for children may literally take off, and next Sunday is the day that we have our first BUMBLEair flight!

How did this flight come about and who are you helping?

This opportunity has been on the horizon for a little while, I had contact from a friendly Irish Commercial Pilot, Ryan Hanrahan, who wanted to make a difference for sick child, based on the Angel Wings service in the US, when Ryan found about us, he asked could he join us in helping make life a little bit better for one of the very sick children we support, (last year we did over 800 child trips!).

With this in mind, we considered many of the children we help week in week out, one child whom we have been helping with our Children Chemo cab service via our New Northwest based BUMBLEance, the child in question is KING BEE 12 yr old. Keith Gallagher from Mayo.

Keith and his family have had a terrible time, not only being diagnosed with a serious strain of cancer, but the family also lost their mom recently, also from cancer, so Keith’s Dad, David, has had a lot of struggle as of late, having to rear a family on his own coupled with the fact that Keith has to get chemo weekly and make 4 hour trips to/from Dublin on BUMBLEance . I think this little man needs to experience the BUMBLEance Experience in the air!

Who is involved in helping Bumbleair happen from people in the charity, hospital, doctors, the family, pilots to helicopter owners?

Keith attends Castlebar and Crumlin Hospital and our team at BUMBLEance liaise with his care providers to get him in and out of his treatments in Dublin etc.. so on Sunday Keith will be picked up with Dad David by our BUMBLEance team in the Northwest led by Aiden Thompson, an ex-Air Corps Rescue 1198 paramedic, taking them to Knock Airport and then they fly to Dublin and will be met by BUMBLEance 4, driven by John McGuinness, who is our main driver there.

John actually only lost his daughter Abbey to Batten Disease last December, she had her BUMBLEance Angel trip and grew her Angel wings at home in Tallaght, surrounded by all her family, My Wife Mary and I were also there, we became very close to Abbey and the family and my wife was and still is a great support to them.

What is your ultimate dream for the charity and for BumbleAir?

Simple, I want an Ireland (and then a world!) where the fear of a child travelling to and from hospital no longer exists, life is too short, so let’s pack in as much quality time as possible.

Mary and I know how precious time is, and parents should enjoy the time with their kids as much as possible, and if the public and business world continue to support us, we can deliver even more smiles and hugs!

RTE Lifestyle will be covering the flight and will have an update and images from the first ever BUMBLEair flight on Monday, July 3. 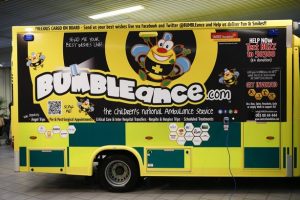 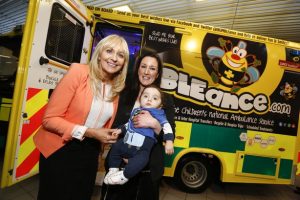 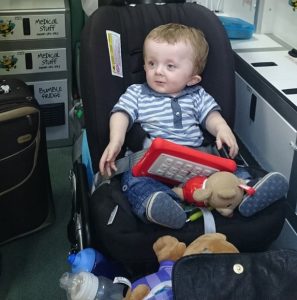